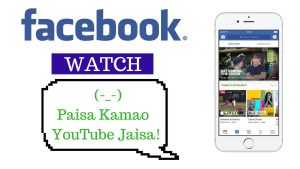 Hello friends, Facebook is now emerging from its Analytica scandal case. With this, it is bringing new offers and services to its publishers to entice users, so that it can make Facebook more popular and use Facebook for personal work as well as to earn money, This time a similar service called Facebook Watch has been launched.

What is Facebook Watch? And we will talk in detail about how we can connect with it. Some time ago Facebook launched a similar Services Instant Article for Bloggers, with the help of which we can earn money by sharing articles on Facebook.

For a long time we all have been talking about Facebook Video Monetization, I have talked about it earlier as well that how we can place Ads on our Facebook Videos?

All of you on Facebook must have seen many such fan pages on which Ad comes even before Facebook Watch is launched. So what is the Facebook Watch program in this case? And for what has it been launched?

If this question is coming in your mind then let me tell you that this is not a new make money feature which has been launched by Facebook. Facebook watch was launched only in 2017 and at that time it was available only for US and popular facebook pages which have millions of likes on their pages.

Facebook Watch is a video-on-demand service which has now been launched Globally and for everyone, that is, now anyone can place their Facebook Video Par Ads. If you are connected to facebook then you can join facebook watch program by sharing video and earn money.

We all know about YouTube policies and if you are a creator then you would know better what to do for Youtube Video Monetization?

In such a situation, Facebook planned about a platform like youtube and launched the youtube watch program. It has been launched globally because its result was very good in the US and due to this 50 million users remain active every month.

That’s why Facebook has decided to launch it Globally and now it is already available in US, Ireland, Australia and New Zealand along with US. With this now also in Argentina, Belgium, Bolivia, Chile, Colombia, Denmark, The Dominican Republic, Ecuador, El Salvador, France, Germany, Guatemala, Honduras, Mexico, Netherlands, Norway, Peru, Portugal, Spain, Sweden and Thailand became available.

If we want to join the Facebook Watch Program, then we have to be prepared for it and some of the requirements we have should be complete, only then can we join this program?

All videos uploaded on Facebook page should be of at least 3 minutes.
This is for a page that has more than 10,000 followers and in the last 2 months, more than 30,000 viewers have viewed the published content on the page for at least 1 minute.

So far it is not for Facebook Watch India, but soon it is going to be launched in our country too, so if you want to check whether your page is eligible for it or not,

With Facebook Video Streaming Earn Money With Ad, you can check whether your page is eligible for Facebook watch or not and if not, then what requirements do you need for this.

Joining Facebook Watch Program will benefit us as a publisher but it also has many disadvantages. for example..

If we join facebook watch as a publisher then we will be benefited and we can put ads on it and earn money. But there will be very little benefit for the users, because along with some good videos on Facebook, many Unwanted videos will also come as we get to see on YouTube.

Friends, Facebook Watch has been Globally Launched, it has come in the news, but it cannot be directly accessed anywhere in India. Hope Facebook Video monetization program is common to all and we all can use this service.

Social Media Influencer Kaise Bane? How To Be a Social Media Influencer and Make Money Online Hello friends, Social media is such an online platform that can give us many benefits like thousands and millions of traffic, Business Lead & Sales and Brand popularity every day. But for this it is necessary to be a…

What is the Zomato business revenue model? (Hindi) Hello friends, we can order online fresh food from our favorite restaurant, food plaza sitting at home and in some time food, breakfast everything happens at our home. But have you ever wondered how businesses like Zomato, Swiggy, Uber Eats earn money? How else does it work?…

Friends..! If you search on the Internet that how to earn money from Paytm? So maybe many posts related to this will be found. But very few of these will be such tricks, with the help of which money can be earned from Paytm in today’s time. But here I am going to tell about…

Facebook Video Monetization से ख़तम होगा YouTube का Monopoly: Friends..! The time has come for which you were waiting since months. Because Facebook has launched Video Monetization Service. That is, now like YouTube, uploading videos on Facebook can be monetized with Ad Network and money can be earned. A few months ago there was news…

Interested in 20 popular ways to earn money from internet. If you become successful in any of these, then you can earn from 10000 to 100000 rupees per month. The most important thing about all these ways to earn money online is that it is not limited to people of any age group. Through all…

At this time Oneplus Best Smartphone Contest is going on. Under this contest, anyone can win Rs 1 crore and with this, all Participant will get Amazon Gift cards of Rs 500, 1000 and 2000 through Oneplus. So in such a situation, if you also want to try your luck, then you too can participate…